I used to be a wellness blogger. I began researching blogs as early as 2005. By 2007 I was writing my own posts and through 2012, blogging and bloggers were a part of my everyday life. During that time I faithfully read a particular blogger named Amanda Soule, the name of her blog was Soule Mama. Amanda wrote about her family life in Maine. She was authoring books on crafting with children. She included her very large following in details about unschooling, her pregnancies, her various making/crafts and cooking, and her honest commentary about life. Things like having popcorn for dinner. again. Eventually they bought a farm and it was wonderful to be a part of as they made it their own, and learned along the way. I loved Amanda's authenticity. I'd never been to Maine. I felt like she took me there. I felt like all of us who read her were part of her family somehow. She hosted sponsors on her blog. Very select vendors paid a fee and got to benefit from her traffic and her audience. This method of monetizing her blog matched her sensibilities. I liked this. I liked her blogs crisp appearance and how consistently she posted. In March 2019, she stopped writing blog posts. I felt a real loss of sorts that I found hard to explain. I was with her and her family for 12 years. i was going to miss her. She left her blog for a variety of reasons. Where before she would write about her children and their dynamic as a family. Now with one off to college ( oh my gosh ) she wrote. " they are no longer her stories to tell." The tone had shifted as to what to write about. Gosh, I know that feeling.

Along her way, Amanda adventured into independently publishing an ad-free magazine. It was called Taproot. In it's beginnings, and curious to be a part of it all, I subscribed. Unfortunately, after 8 issues, the cost even in an annual reduced subscription was out of my league. I did however affectionately observe the publication continue to become online. As it grew and succeeded, I felt proud somehow, like a "good for you" feeling. I loved the earthy, caring, very beautiful and thought provoking content. Original poetry, stories, illustrations, and photography filled its pages. The 8 issues I did have stayed in my home library all these years. 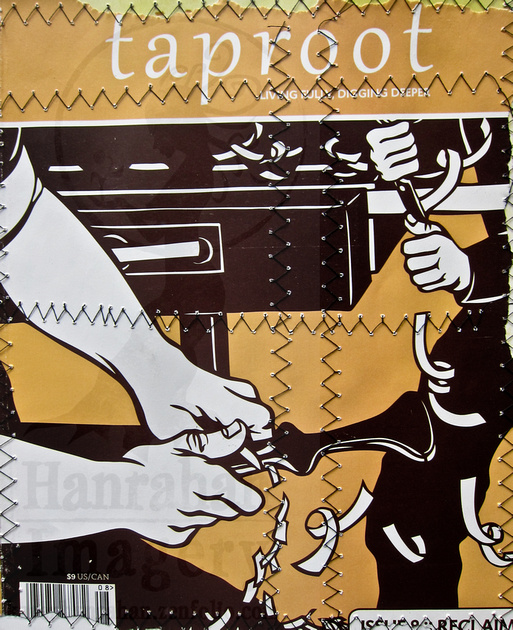 All said, the above back round story is what brings me to the purpose of this post and project.

After moving to Bellingham, Wa in 2015, I noticed a FB event announcement about an illustrator named Phoebe Wahl. I thought to myself, how is it that name rings such a bell. Later more local happenings occurred for Phoebe, including the opening of a brick and morter store, known as Phoebe Bird. A fellow artisan was one of the vendors at the opening! As I looked at the store offerings, there it was again. Something familiar. and then it hit me! Oh my gosh!! It's that lovely young artist from Taproot magazine! Wow! I was quite endeared to Phoebe's early work. She illustrated life and family in the PNW. Both Maine and the PNW were not familiar to me, but she made them come alive. Especially the homes in the woods. I love trees!

I pulled out the 8 Taproot issues that I had carried with me for so long. My desire to tear them apart and collage with them was very real. Now seemed like a good time. Phoebe's work of course were pages I immediately pulled. As I looked at the pile, I found pairings and colors that would blend well. I started to make. 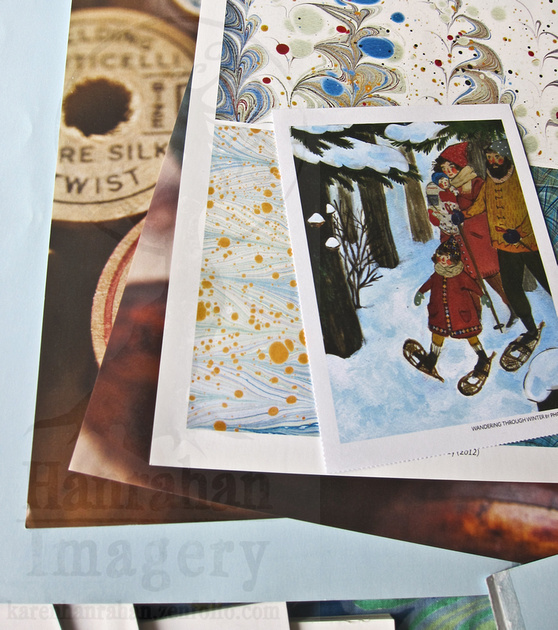 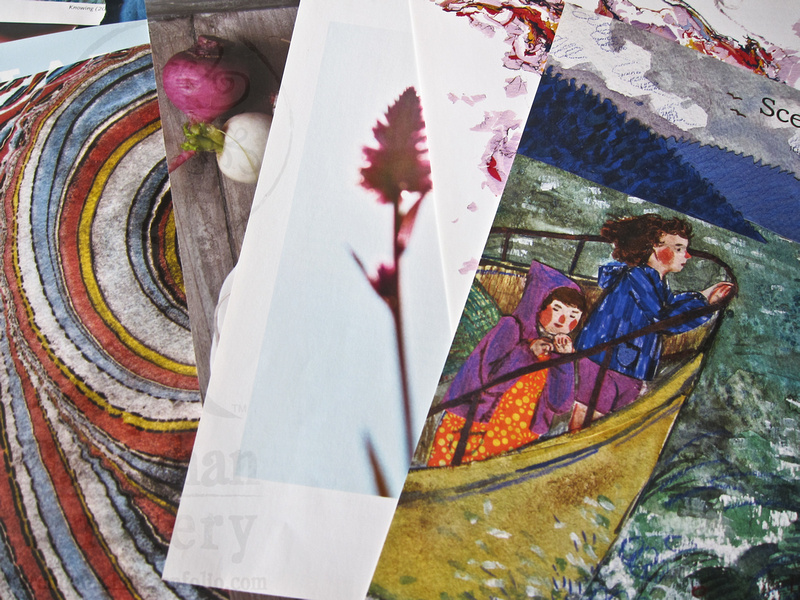 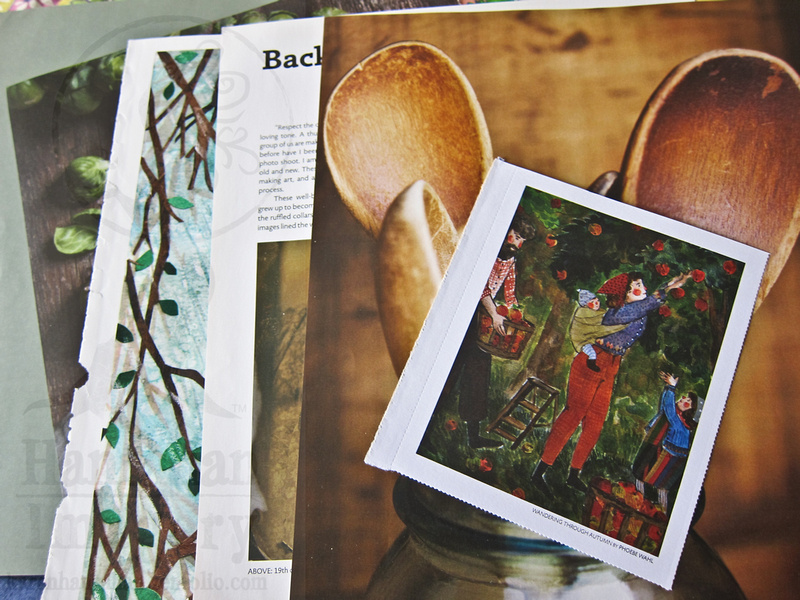 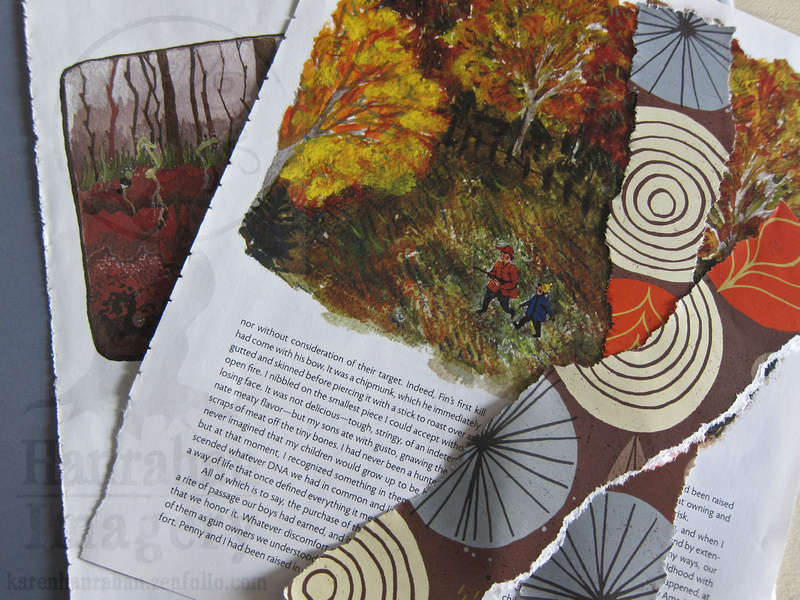 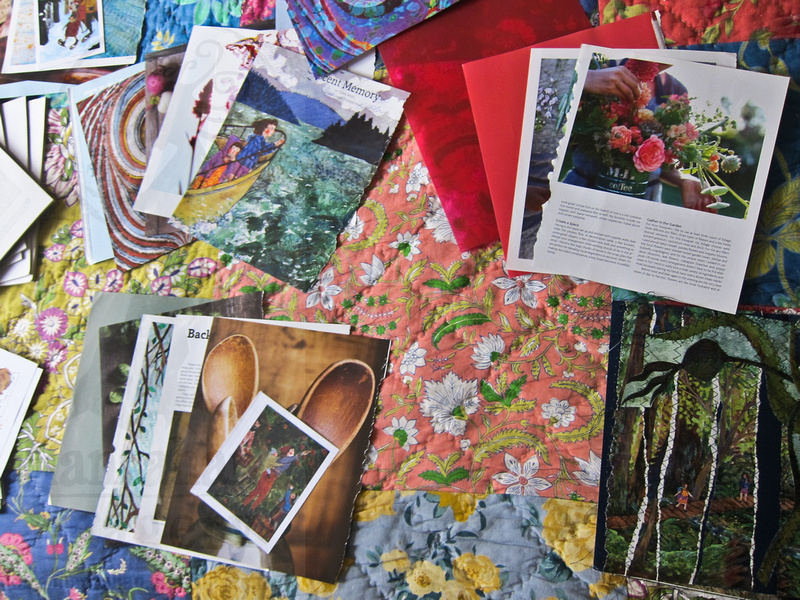 As these progressed I thought I should introduce myself to Phoebe and ask her permission before I made many more.  Add that I was an awkward geeky fan. I also wanted to wish her well.  It took months to finally have 10 minutes with her, but in that meeting I showed her the beginnings of my work and got her blessing.

Now I could finish the series. 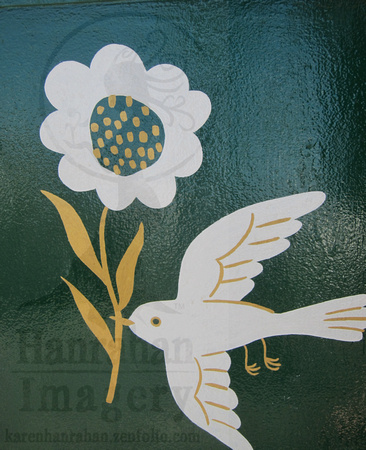 Behold the 16 stitched collages that morph Taproot magazine elements with illustrations by Phoebe Wahl.  My intent for the project was to honor the years I spent with this magazine and it's contributors.

The rich, natural, vibrant tone of the publications really presented themselves into the pieces.

I am very happy with the collection so far.

I plan to do another collection soon. 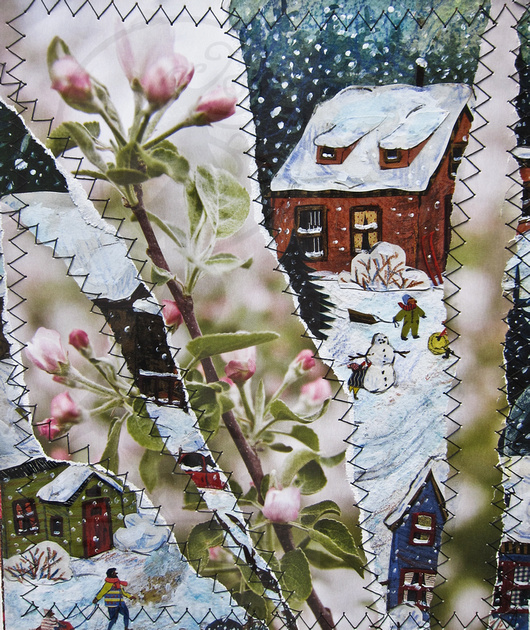 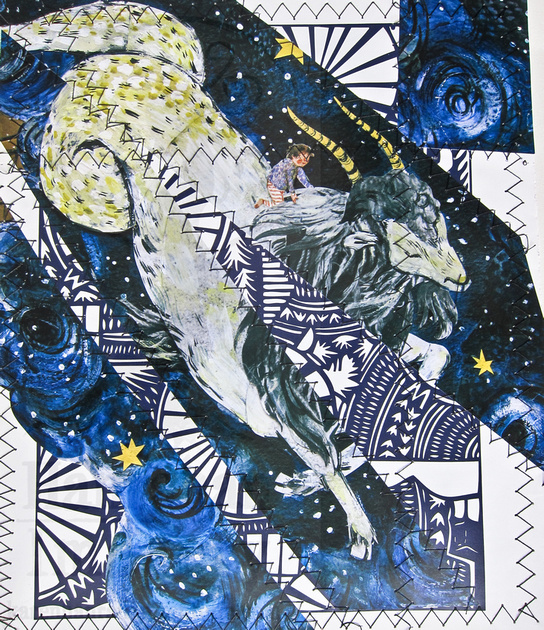 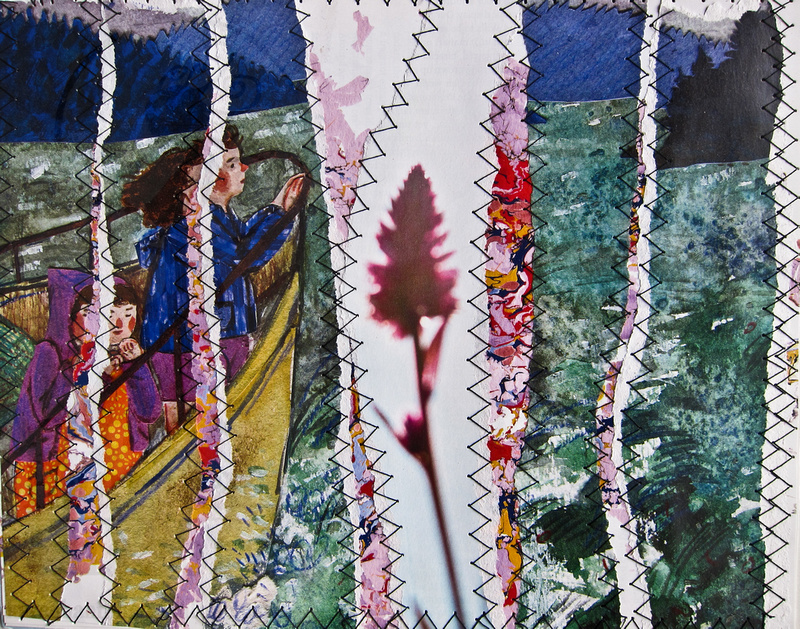 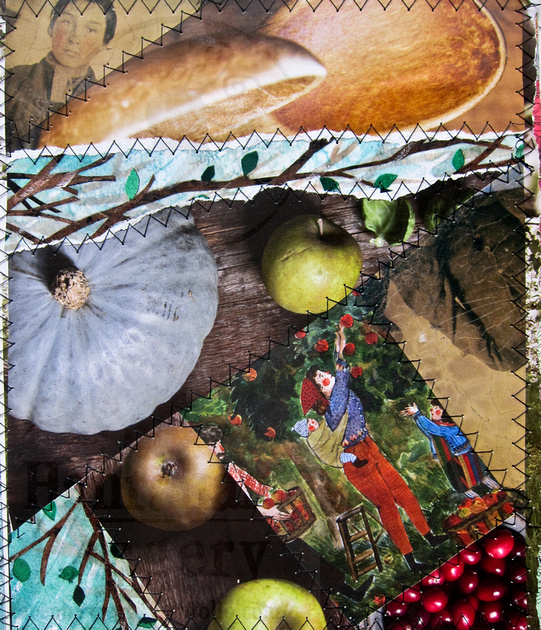 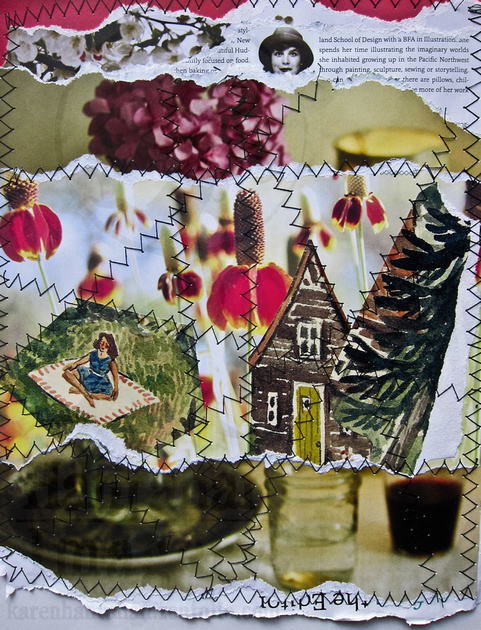 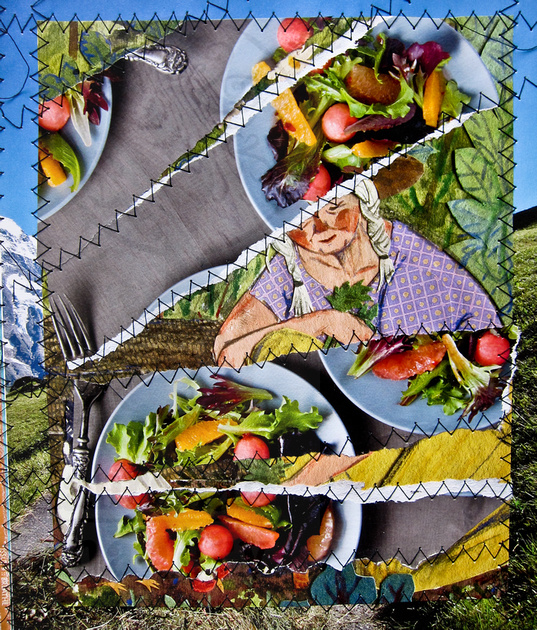 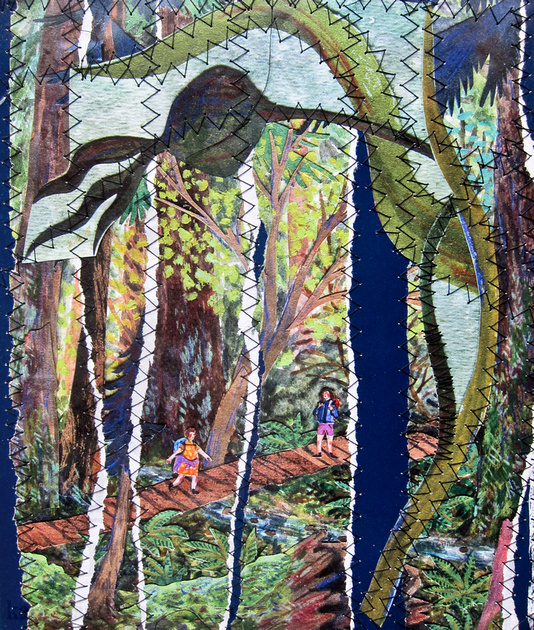 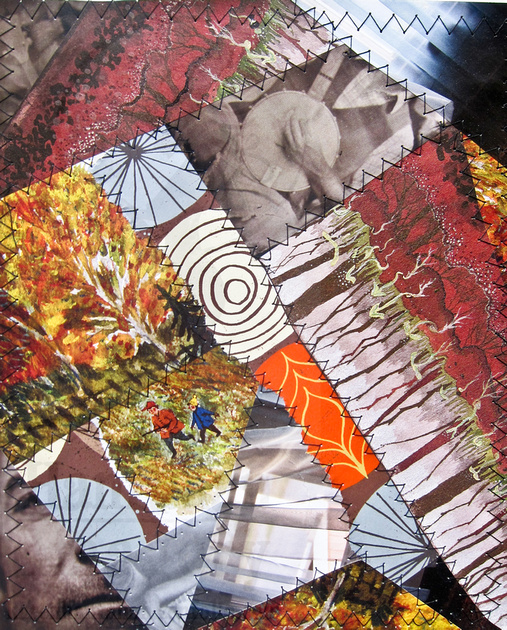 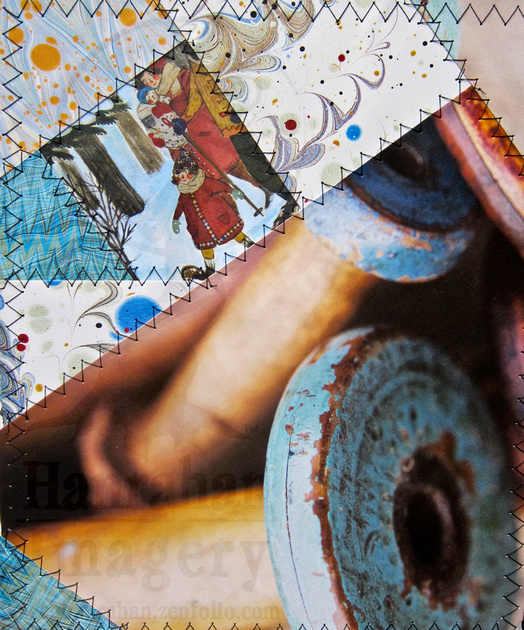 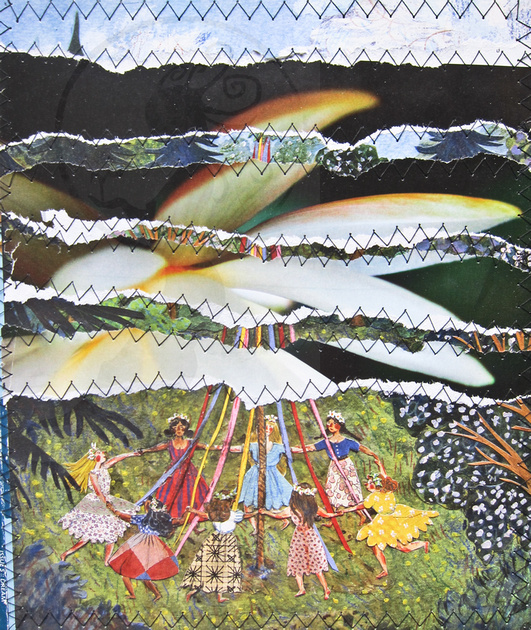 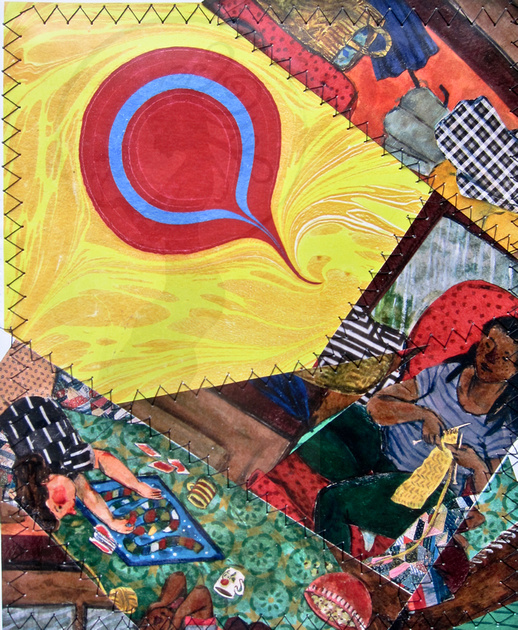 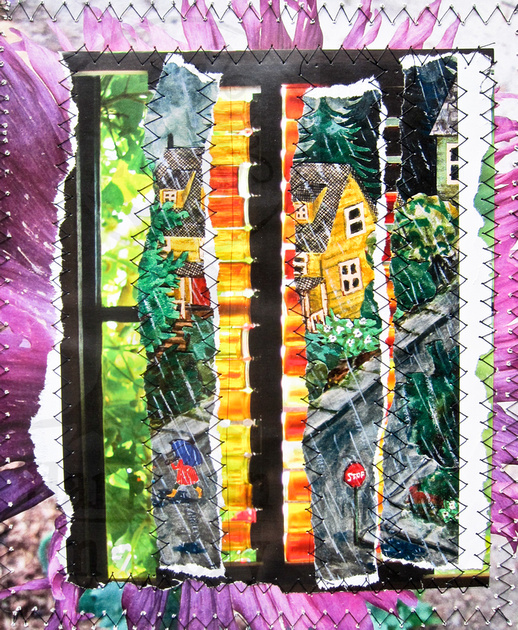 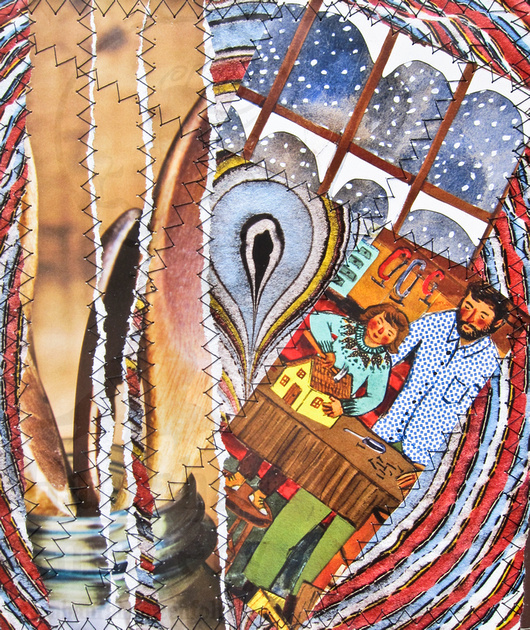 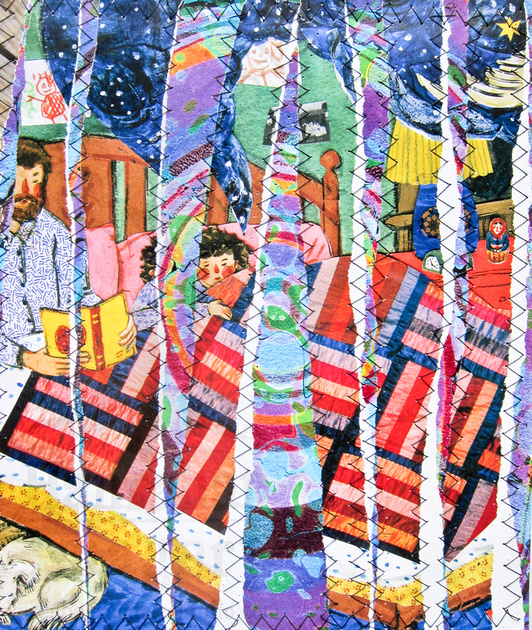 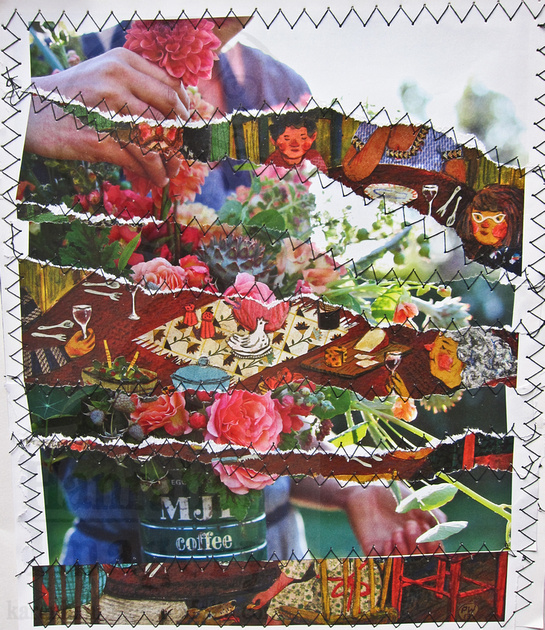