A Letter To Artist Sanaz Haghini

Woman Made Gallery hosted an exhibit titled "Reciprocity". The theme was about artists pairing their work. What struck me most about the exhibit was how many of the artists knew each other for such a long while.

The gallery put out an additional art call for letters to the participating artists, a project of sorts, offering thanks to an assigned work of art and the artist. I signed on. I heard the response to participate was overwhelming.

How wonderful is that!

The artist that I was assigned to was Sanaz Haghini. She submitted this distinctive red and black screen print titled "Struggle".

You can see the work of the artist she paired with here, along with the entire exhibit here.

In her artist statement she writes:

"My work examines how culture and its identity can be understood from its women’s status and circumstances, such as the roles they play in society, the rights they enjoy (or not), and most pointedly, the dress codes to which they must adhere. For this collaboration, I wanted to depict a woman with a chador, a black veil that swallows the woman in its form. I wanted to envision a woman who struggles with her thoughts, a woman who attempts to hold or release something. I try to visualize an impression of being safe or being insecure. My work depicts the hiddenness, which is in contrast with Lara’s work. Mine is a silence, and hers is a scream. Mine is a secret, and hers is a manifest. From my view, this familiar contrast identifies the same situation. Even though we are from different lands, we face similarities because of our sex. This collaboration helped me to understand the meaning of being a woman in another culture. These similarities make us as a woman to be closer together and have respect for our struggles."

Part of my letter to her said:

"Thank you for your work “Struggle” Sanaz! Several things spoke to me about your screen print. My most immediate response was from your use of red and black. Both haunting and striking. One could not mistake the struggle of the figure. You said it was a swallowing of form. I thought invisibility. I thought ordinary. I thought of how in day to day life one can be lost. That even hidden one can still visibly bleed. Powerful. I was also struck by the reflection in the red. I felt it portrayed how we never really get away from what we hide from or what haunts us. I loved what you wrote about the contrasts between your work and Lara’s. “Yours is silence, hers is a scream.” I felt both!  Thank you for your ability to provoke. I spent quite a bit of time with this exhibit. What touched me the most was the many long term relationships between paired artists. Many offered mutual admiration and contrasting art styles. The gathering as a whole was an experience. Even if I only viewed it online. I love that about art!" 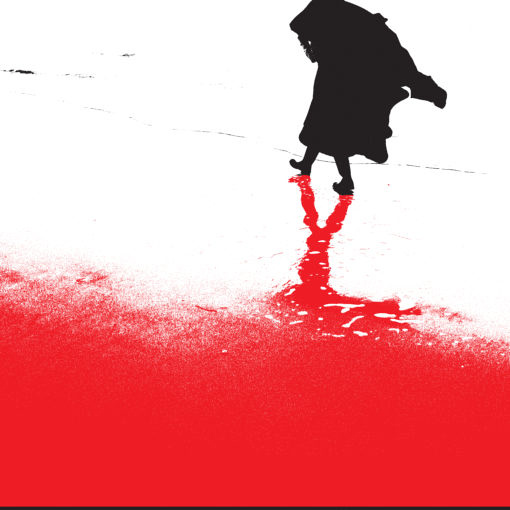