Self Portrait In Chalk On Velvet

Behold - a drawing I rendered in the early 90's.

The class assignment was to replicate a famous artist in our own likeness on an 18 x 24 piece of black velvet paper. The instruction angered me. I was not skilled in chalk, I thought velvet looked cheesy. I had no interest in myself or looking at myself artistically. Plus I was not having a very good week.

To give you perspective I was in my thirties, a mother of two. My marriage was falling apart and I was striking out on my own. Against the wishes of said husband I enrolled in art classes, and I took on a part-time job on the weekends. He had not allowed me to buy a pair of much needed shoes, thus the reason for working.  I'll just get my own shoes thank you very much. He complained about having to watch his kids while I did things that were of interest to me.

On my way to work, I was sitting in traffic at a red light. It was raining. really really raining. The stop light was on the other side of a bridge overpass. As I looked up in my rear-view mirror a car came flying over the bridge, the three men sitting in the front seat looked as if they were on a roller coaster ride. Obviously they were going too fast. Obviously they were going to hit me, and even more obvious - there was not a single thing I could do about it. The rear end of my car was smashed all the way to the driver seat.  The airbag did not deploy, my head cracked the windshield, glasses had been flung off my head, I could not stop trembling. I was pulled out of the vehicle. I was placed on a gurney, I remember the wet and the light spin of the emergency vehicles at the scene - it rained on me for a rather long while. I was wearing my new shoes.  I don't see well without my glasses. Much was blurry. I don't recall much else - did I hit the car in front of me, were others hurt? All I know is I had to ask someone to call my work and say I couldn't make it in that day and that I had to alert my family.  I kept asking if someone had called to explain why I was late. I never saw that car again. Over and over I imagined what would have happened had either of my children been in that car.  The person who hit me of course had no insurance. My insurance did not total my vehicle. Lets add insurance stupidity to the occasion.

In ER, I got my period. ( the things we remember ) I was not allowed to get up to pee and or to take care of my bleeding. They offered me a bed pan. I was mortified. I think I was wearing tights. What a mess. My husband arrived at the hospital and just looked at me with worry in his eyes. Not the "I am with you...you are going to be OK - we can get through this together"  sortof eyes. Just worry. I couldn't handle the worry. I needed the reassurance more than ever. We were long gone and far away from that sortof relationship.

The accident occurred on Easter weekend, and on Easter Sunday I was expected to attend a family dinner at a restaurant.  I remember the remarkable pain I was in, the chasing of my kids who were not very restaurant trained (we didn't do eating out for a reason) but hey, it was brunch, it was important to his family and there was plenty of champagne and boy my husband was having his fill of it.  I dared to mention the discomfort that I was in and I was told to take the pain meds I was given.  and while I had, the pain I felt was still indescribable - I drove home that evening because he had had too much to drink.  I could not move my neck. All I could do was look straight and there were tears streaming down my face.

At the time I was referred to a D.O. for post accident care. I had never met him and I was not invited to see him again. He told me, I was going to hurt for a very long while. He told me to quit my job, to restrict my lifting and good luck. I had no diagnosis just a scrip for more pain killers.

I went to my art class that week, because in that class I felt valued and I felt most like myself. I loved being a mom, but the tediousness of parts of motherhood were very soul sucking. Once I gave birth to a child. My husband vacated what I had know as a couple. I was drowning in ordinary and feeling alone in a lot of the equation. Art reminded me that I was alive.

There I was in this class, uncomfortable and in pain and now having to do this stupid assignment.  In creating this piece I only recall that I lost myself in the assignment. The rendering flowed out of me. I was angry. Very angry, and because I was so resistant to the task - I missed what I had portrayed. Basically, I took the piece home, added it to my portfolio and never looked at it again. it was just a stupid class assignment.

Fast forward many years later, I had put art aside. My first marriage had ended. I was on the other side of a failed second marriage. sigh. several more car accidents had occurred. I was buying my first house near where my daughter was attending college. A lot of life had passed me by. Sixteen years of life. In the move I unburied this old portfolio and pulled out this drawing. I was just in awe of what I had encapsulated of the time.

First of all, the female form. If i had any sense of myself as a woman and my own personal beauty - it was not at that time - but the fact that I expressed such beauty, and even a small bit of nudity to me said that my strength of self as a woman was there - even if that personal strength was buried deep inside of me. Choosing Picasso and that pose was bold and courageous for me.

The actual chalking was way more skilled than I ever give or gave myself credit for - yes, it was copying another artist, but as I got to know myself as an artist - this chalking technique was rendered with my own skill and my own ideas.

Finally,  that face. oh my gosh that face. the crooked neck obviously signifying the accident, the blue hair (my favorite color), the glasses,the earrings (which I still have and wear) , the narrow skeletal structure, and the asymmetry so very important to my expression in art. that face was definitely me.

The defining moment of this chalk drawing is the pain in that face. the pain rendered of my face is so raw and so revealing. so hurt and so so so very sad.  I may have drawn in anger and resistance, but this person on this page was unhappy, and in deep deep pain.

Since, this piece has stayed in my portfolio. I found a renewed love and appreciation for it, and a respect for the personal reveal of my art. I just have to remind myself to look with eyes that are removed somehow, perhaps detached is a better way to say that - to be detached from my life and circumstances in order to review what I create as art.

Not always an easy thing to do.

( chalk on velvet by Karen Hanrahan.  self-portrait rendered in the style of Picasso - 1993 ) 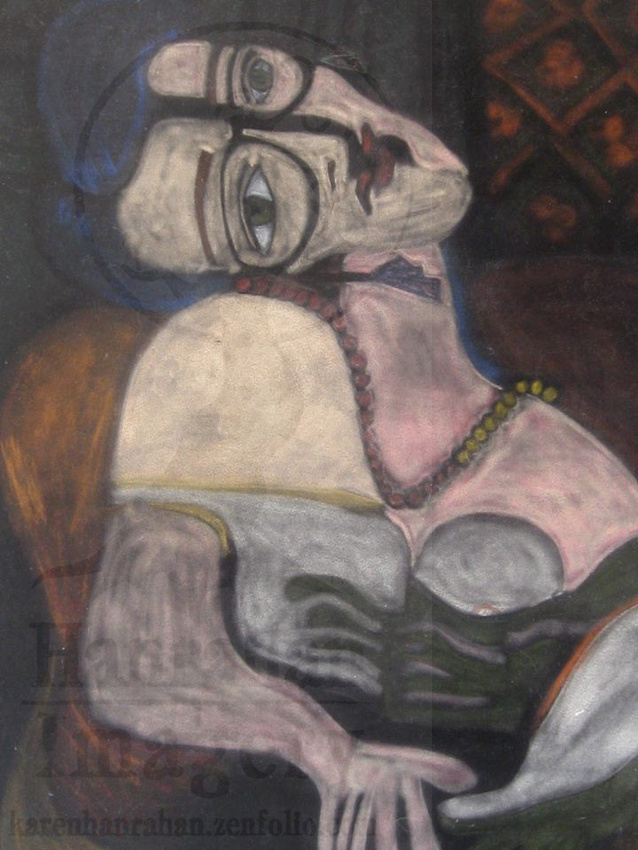 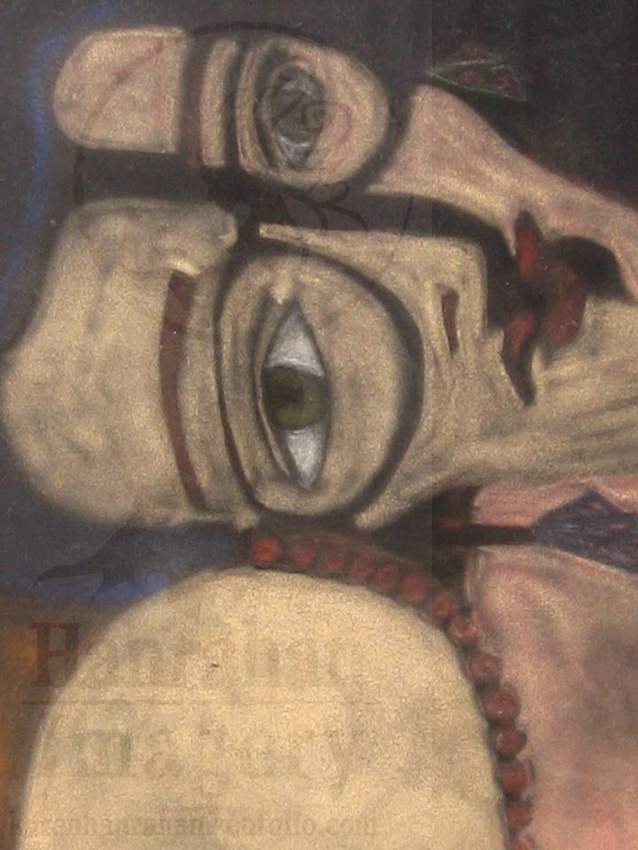 Collage Artist And Photographer Karen Hanrahan
Absolutely Sara! Time + perspective is a beautiful thing!
Sara(non-registered)
What a lovely post, Karen. I love personal histories, especially about artists I admire. Isn't it wonderful, the evolution of our perspective on our own work given a bit of time?
No comments posted.
Loading...